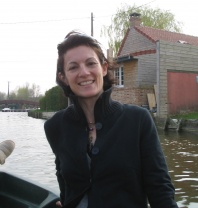 Sarah completed her teacher’s training course with Pilates guru Alan Herdman in 1996.  Previously a professional ballet dancer, Sarah had practised Pilates throughout her career, both as a strengthening routine and during times of injury.  On completion of the course, Sarah went on to set up her own ‘mat work’ classes as well as teaching in other London studios. The desire to teach in semi- private situations, and the lack of such a studio outside of central London, led to the opening of the Sarah Duley Pilates Studio, from her home, in September 1999.

During this time Sarah became a founder member of the Pilates Foundation, now one of the leading bodies of the Pilates world.  When pregnant with her second child the necessity to move the studio out of home increased, and Pilates Plus was opened in St Margarets in October 2001.  In September 2003 Sarah also qualified as a GYROTONIC® teacher, followed shortly after by her Gyrokinesis qualification.